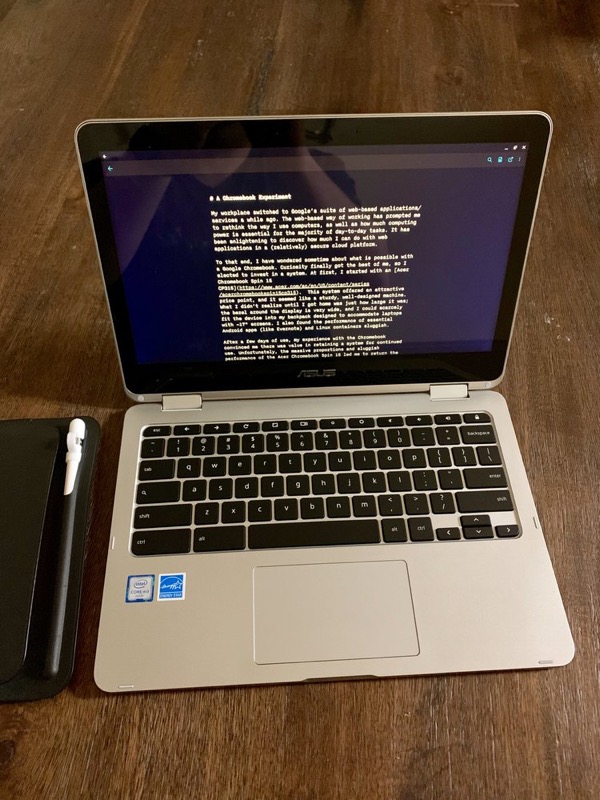 Approximately one year ago, I purchased an Asus Chromebook Flip C302CA to experience a modern, cloud-connected way of working using Google’s Chrome OS. I was curious about Chromebooks for a while, and it was interesting to discover what was possible with these machines. Ultimately, I found the Chromebook was better suited for the needs of my beloved wife and children, so I gave it to them. It worked out for me, too; I ended up with an Acer Predator Helios 500 that was a better fit for my needs and interests (e.g., coding & gaming). Even so, I am impressed with how capable a Chromebook is. These are fantastic machines for someone desiring a computer with a user experience more resemblant of a smartphone or tablet.

Google positions the Chromebook as ” a computer that is smart, secure and ready when you are” on their web site. For the most part, I found this to be true. The hardware and software of my Chromebook seemed to work well together for typical use cases (e.g., Internet access, web-based applications, Android apps). The device started quickly, had great battery life, maintenance & updates were painless, and it was indeed “ready” (so long as WiFi was available).

The way Asus designed the C302CA positively impacted my experiences with this Chromebook. It’s certainly much smaller and lighter than the laptop I have now, which encouraged keeping the device with me when I moved around the house or went out to run errands. It was highly portable and by no means a “burden” to carry. The “flip” design made it easy to switch modalities based on what I was doing. For keyboard-centric productive work: conventional laptop (clamshell) configuration with a handy backlit-keyboard. For interactive touch-based content or experiences: tablet mode. For passive content consumption (e.g., watching a movie or a webconference): tent or presentation mode. The hinge was sturdy, and switching from one modality to the next was effortless.

Not only was the Chromebook easy to use, sharing it with others was a breeze. I created an account my wife could use on those (rare) occasions where she needed a “real computer” to do something. Sadly, some websites are difficult (or impossible) to use with a smartphone. My children loved playing educational games or watching their favorite movies & shows on the device. They figured out how to work the touch screen with minimal instruction from me. The Chromebook was comfortable to hold and inviting to use—no small feat given the limited technical knowledge/skills these young “users” have.

Things that didn’t work well (for me)

For all the things I enjoyed about the Asus Chromebook C302CA, it had one major drawback: it did not support Linux containers. Sure, I found a decent text editor that functioned when WiFi wasn’t available. I also made extensive use of crosh and the secure shell extension to access my Linux server. Even so, I found myself missing many of the great tools and resources available in a standard Linux installation, especially when WiFi was unavailable. Coincidentally, Google announced that every model of Chromebook launched in 2019 or later would support Linux containers (Crostini). Unfortunately for me, the Asus Chromebook C302CA was already a couple of years old at the time. Consequently, it would not be updated to enable Google-supported Linux containers.

The other predicament I noticed after using the Chromebook a while was the inconsistencies with Android apps. Android apps are intended primarily for phones and tablets; they are (usually) not optimized for use on a Chromebook. Some apps were reasonably consistent. In other cases, I was disappointed with the user experience—especially apps available on a wide variety of desktop and mobile operating systems (e.g., Evernote, iA Writer, Office 365). There was noticeable feature disparity and disappointing “fit and finish” in terms of aesthetics, performance, and reliability. The Android app catalog undoubtedly adds value to the Chromebook platform, but don’t be surprised if you encounter inconsistencies in the user experience.

In the end, I learned quite a bit about the Chromebook from this experiment. I have a great deal of respect for how well Google’s Chrome OS works and a clearer understanding of suitable user demographics for this device. Chromebooks are highly capable computers. I have no reservations about recommending it to either middle or high school students. It’s also an excellent fit for individuals who need occasional access to a “real computer” but prefer to use their smartphone or tablet. If you’re looking for a computer that offers substantial value for casual work and play, the Chromebook is ideal (if you’ve got reliable access to WiFi Internet).